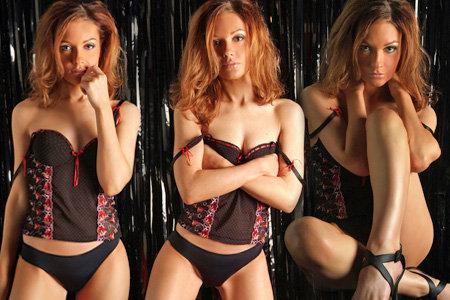 Katharine Leis:  I know it sounds cliché, but I always fall for the guys who make me laugh. I really do not care about looks. I’ve found that guys who spend a lot of time on their appearances may have been better served spending less time on their hair and more on their personalities. Three attributes I look for are drive, intelligence, and of course, that great sense of humor.

Katharine Leis: My most fun date was actually just a run-of-the-mill lunch date. I’ve been on dates before where the guy has gone way out of his way to set something up but there ended up being just no chemistry between us. It’s more fun doing nothing with the right person than doing anything and everything with the wrong one.

Katharine Leis: I met my last boyfriend at a grocery store. We’d run into each other a few times over the course of several months and went from smiling to saying hello. Eventually, he asked me out.

Katharine Leis: Where do you hang out?  Honestly, I don’t go out anymore to bars or clubs. Because I work from home, I like to get out and walk a lot. Walking trails or parks are where you’ll most likely find me when I’m not at my computer.

Katharine Leis: On an airplane. I also travel for work and sometimes there will be an empty seat next to me and a guy will ask if anyone’s sitting there and then hit on me for the duration of the flight. It’s not like I can excuse myself and jump out the airplane…though I actually considered it once!

Katharine Leis: Yes. I had met a guy while working on a freelance job. He seemed really quiet and uncomfortable at first. After a week or two, he became more friendly and was just fun to be around. He became more attractive the more he let down his guard.

Katharine Leis: I think it’s pretty standard. I smile at him a lot, touch his arm briefly in conversation, stand just a little closer than one normally would…I’m terrible at getting hints so I think I’m pretty obvious when I give them.

Katharine Leis: I wish guys would relax about the whole thing. If they like someone, ask them out. If the girl says no, move on. It’s really not that tough of a concept, but it seems the fear of rejection drags things out much longer than they need to be. I’ve been rejected before and it’s really not all that scary. I don’t get what the big fear is.