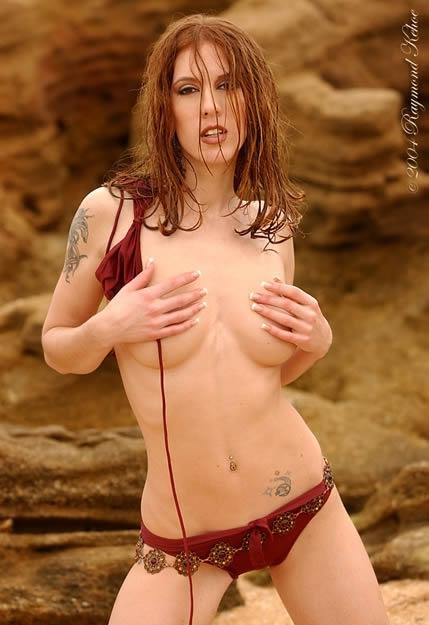 Model, scholar, make-up artist…Courtney James is determined to succeed at any new “gig” that comes her way. Courtney’s modeling accomplishments include: a three page centerfold spread in MARIE CLAIRE magazine, a two page spread in RAMP magazine as the winner of their lingerie model search, as well as appearances in FHM, ELITE, YRB, LOLLIPOP and more. Recently Courtney has begun to persue a bit of television and film work as has been featured on MTV, the DISCOVERY CHANNEL, the SCI-FI channel and the METRO CHANNEL. She has worked with some of the nation’s top photographers and appeared in runway shows and print work for some of the nations top designers. Courtney has established her successful modeling career while persuing a degree in Psychology. She has recently graduated; with honors, as a member of the National Honor Society, a recipient of the National Dean’s List and is listed in the “Who’s Who of Amercian College Students.”  Don’t forget to check out Courtney James’ web site! Enjoy the interview!

Courtney James: I love “rugged” type of men…men who are confident, fun-loving and sexy, without being too into their looks. If a guy takes longer than me to get ready I get annoyed…throw on jeans, a button down (NOT tucked in!!!!) and take me out to do something fun, something different!

Courtney James: My best date ever was a Broadway show…and he reserved an entire balcony section for us…followed by a trip to a hot go-go bar! It was the best of both worlds! He treated me like a princess and then allowed me to let my hair down and have some fun!

Courtney James: In a nightclub…I hit on him…lol…but apparently we had met a few months prior at the same nightclub. That night he had hit ion me and I blew him off…but months later I guess he had a different way about him..I was totally smitten!

Courtney James: I enjoy going to restaurants with my friends, we often have a drink or two at the bar first, so that’s a great place to meet…but it can definitely have that “meat market vibe.” Another great place is any type of sporting facility. Not the gym, because most girls don’t want to be bothered while they are working out. But rock climbing, skiing, or paintball places are great! There is nothing like having a new teammate, ski buddy, or someone to belay you to make a new connection!

Courtney James: At the gym or food shopping…I don’t know why, but I hate that!

Courtney James: I never dated anyone that I didn’t like, but I have dated people who I originally wasn’t attracted to, physically. For those who I became attracted to it was usually because I looked past what they LOOKED like, and got to know who the ARE. Looks are definetly not everything. A great sense of humor, treating me with respect and the ability to have fun goes a long way!

Courtney James: Eye contact and a smile…works every time!

Courtney James: NEVER pretend to be something you are not. Be who you are and be comfortable in your own skin. Don’t be intimidated by anyone and remember to smile…a lot 🙂